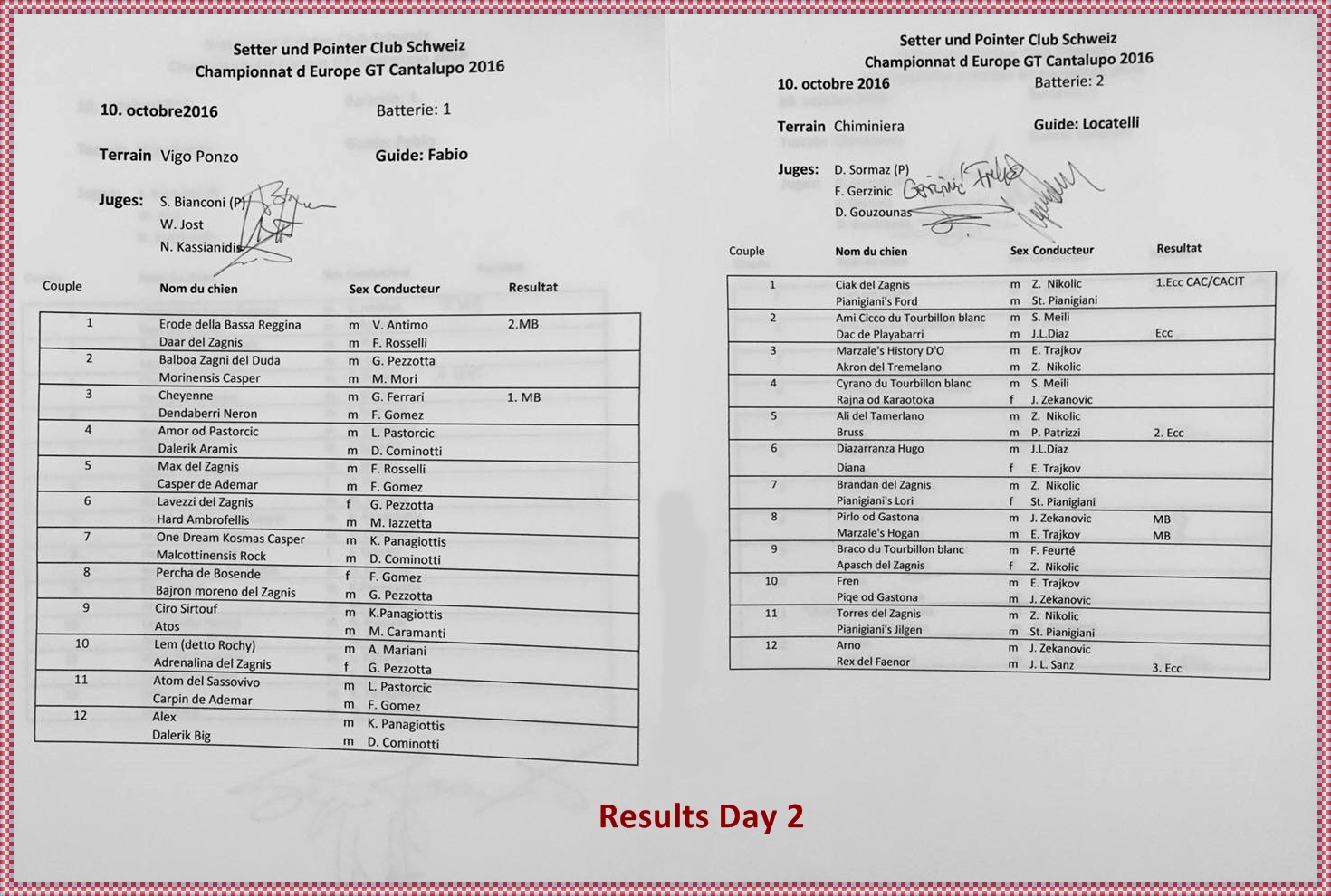 This year the Pointer & Setter Club Schweiz was in charge to organize this important event. Due to the complex Swiss shooting (and dog training) laws, the trial was set up in Northern Italy, only two hours away from the Swiss borders. More specifically, we were hosted by Dr. Machiavelli private shooting estate in Cantalupo Ligure (AL), a place which is both easy to reach and suitable for this kind of trial. Simone Meili, of the Setter & Pointer Club Schweiz, proved to be the human incarnation of the famous Swiss efficiency and precision. The trial brochure was very accurate and she set up a very convenient meeting place: it was extremely easy to find the venue,  it had an ample parking lot, a small bar and a toilet, wi-fi connection and light sockets for computers! As you can imagine, everything else during the trial ran smoothly. 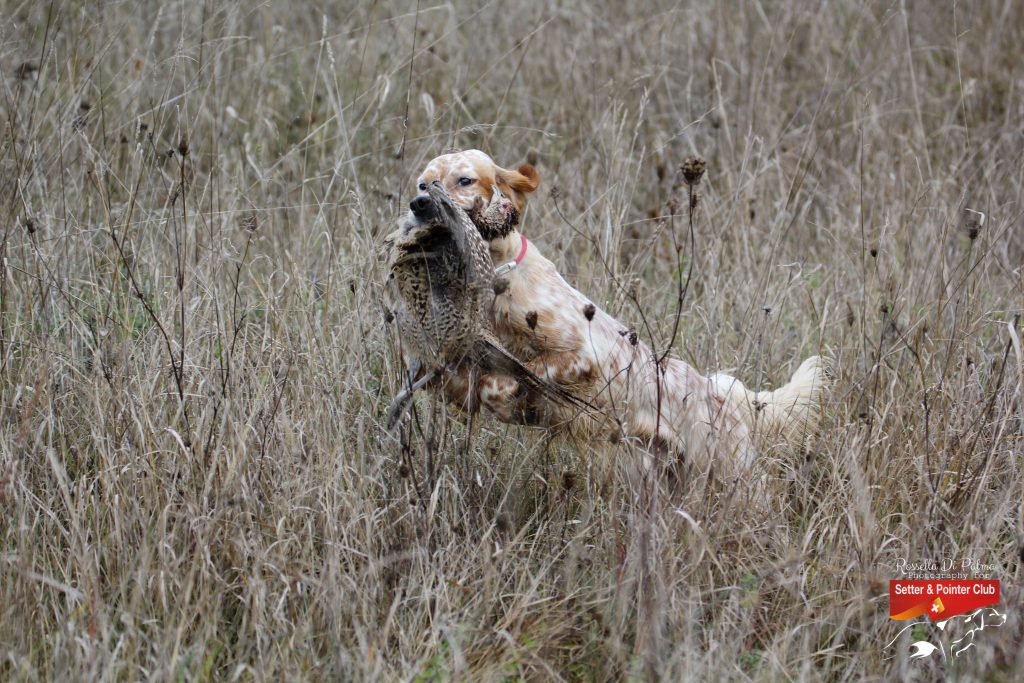 I joined the Championship on the 2nd day (Oct 10), as the previous part of the event had been covered by my colleague Erica Recchia. The atmosphere was very international: there were several teams coming from different parts of Europe. Judges as well had different nationalities and backgrounds. I was told to follow Stake 2, judged by D.Sormaz (Serbia – President), F. Gerzinic (Croatia – right side) and D.Gouzounas (Greece- left side), there were 12 braces in this stake. The stake was going to be run on Chiminiera and we had Roberto Locatelli as beat steward (and gun!) and Dejan Gavrilovic as a second gun. We had rain almost until the first brace was to be casted off, it was an unusually chilly morning for October, with a moderate/fresh breeze which kept changing its direction, making partridges swift to fly and scents tricky to be grasped by the dogs. The grounds were really nice and heterogeneous: dogs could run wide but had to make an intelligent use of the ground. Cantalupo estate is scattered on the hills and its crops and vegetation can dramatically change from place to place During a run, a dog might face grass, briars, small woods, bushes, tall and wiry grass, rocks: dogs had to be smart and adapt themselves, exactly as it would happen during a real rough shooting day. Almost all the dogs had a chance to meet or scent game: there were pheasants and grey partridges coveys. We also bumped into a hare and in a couple of roe deers followed by the respective English Setters. I spotted six wild boars in a distance, while judge Gerzinic said he saw some wolves the night before: I was not surprised as Cantalupo means “singing wolf”.

The first brace was composed by Ciak del Zagnis handled by Nicolic (Serbia) and byPianigiani’s Ford handled by Stefano Pianigiani (Italy). During his run Ciak pointed, produced and retrieved a pheasant, his action lead him to obtain a 1st Exc CAC/CACIT and to become Vice European Champion 2016. In the second brace,  with Ami Cicco du Turbillon Blanc handled by Simone Meilli (Switzerland) and Dac de Playabarry handled by J.L.Diaz we witnessed Dac earning an Exc. To see another action worth grading, we had to wait until brace 5 when Bruss, handled by Patrizzi (Italy), had a nice point and obtained a 2nd Exc. Other dogs graded were Pirlo od Gastona, handled by Zekanovic (Croatia), and Marzale’s Hogan, handled by Elvis Trajkov (Macedonia). During the 12th and last brace, Rex del Faenor handled by Sanz (Spain) had a good run and performed two excellent actions, one of which included a very long roading to produce the pheasant, he was graded 3rd Exc.
At the end of this run, we were joined by the competitors and the judges of Stake 1: Sergio Bianconi (Italy – President), W.Jost (Austria) and N.Kassianidis (Cipro) to decide through a “barrage” which dog, after two trials in two days, was going to obtain the title of European Champion 2016. The judges selected for this task were D.Gouzounas (Greece – President), F. Gerzinic (Croatia) and N.Kassianidis (Cirpo) who, after a quick run, announced Atos, handled by Mirko Caramanti (Italy), to be the winner.

Click here to see the event photogallery as a slideshow

Click here to see the event photogallery as an album 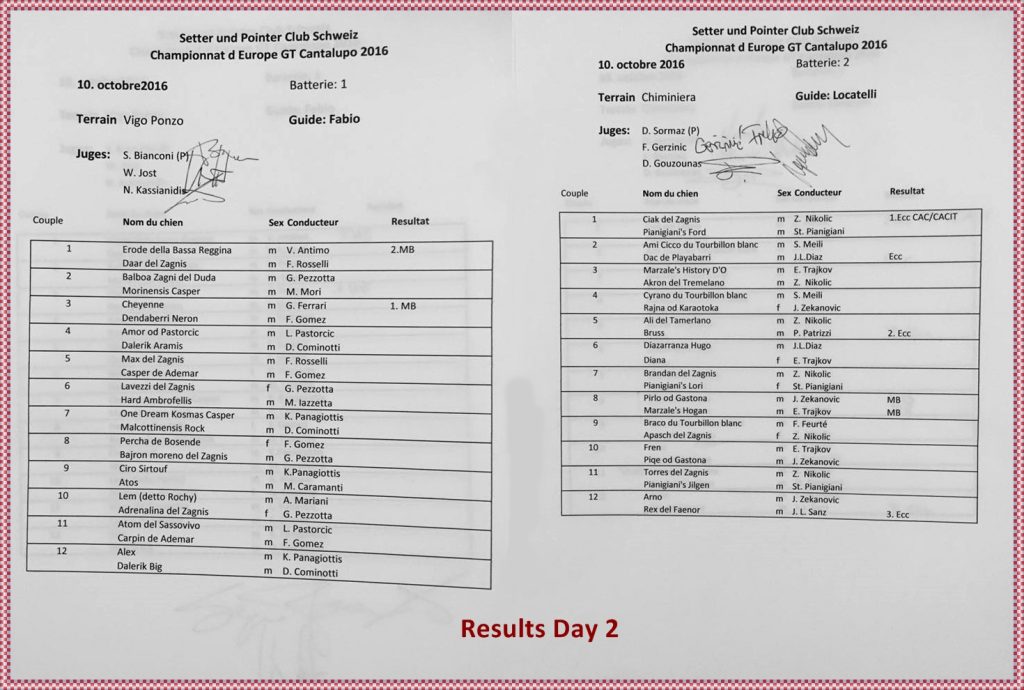 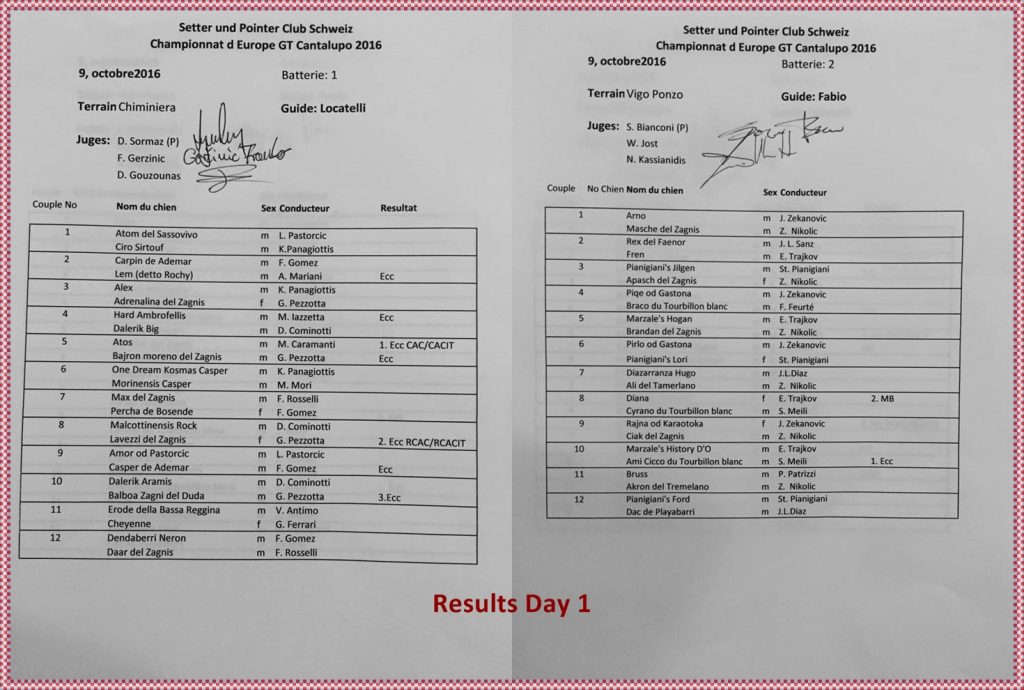 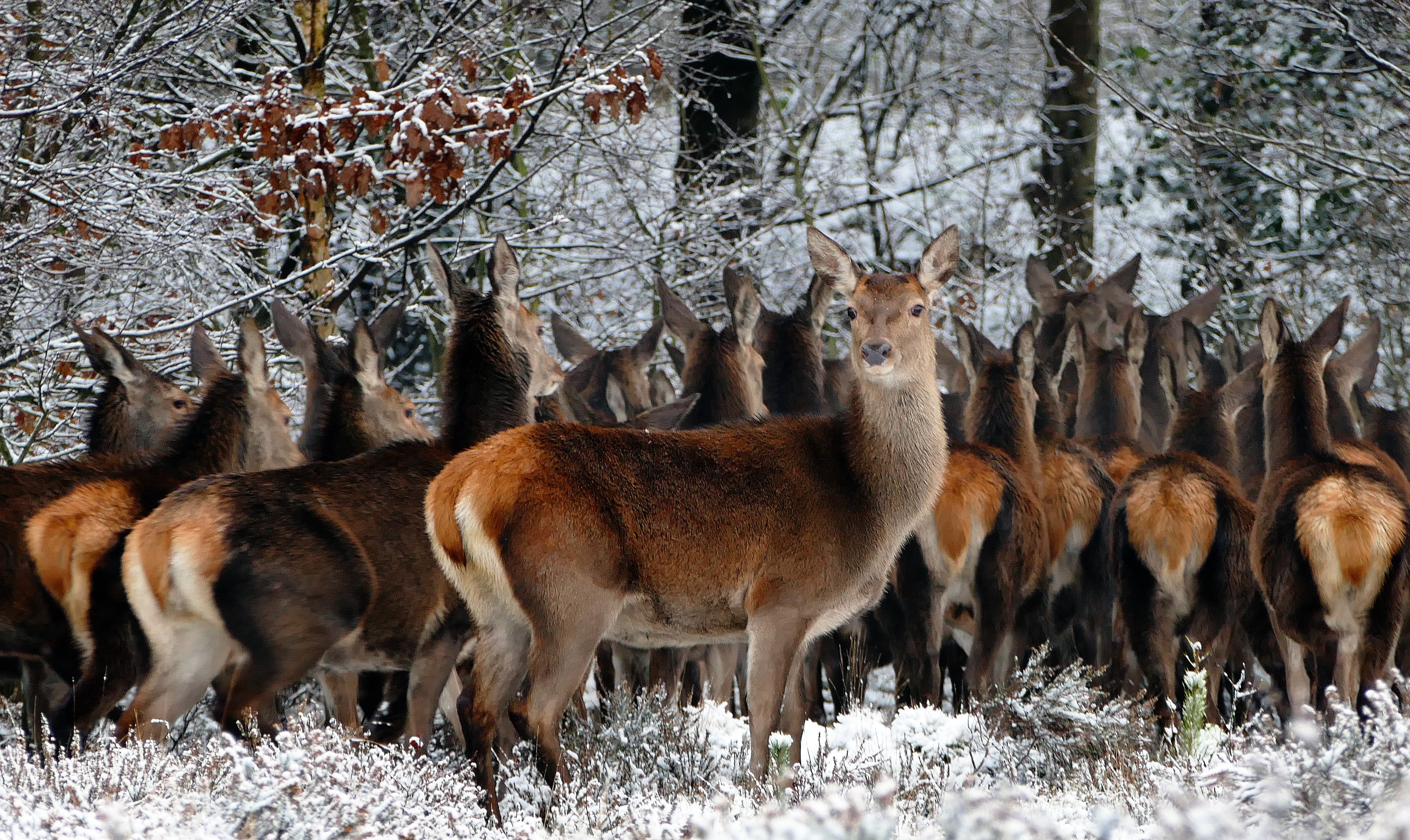 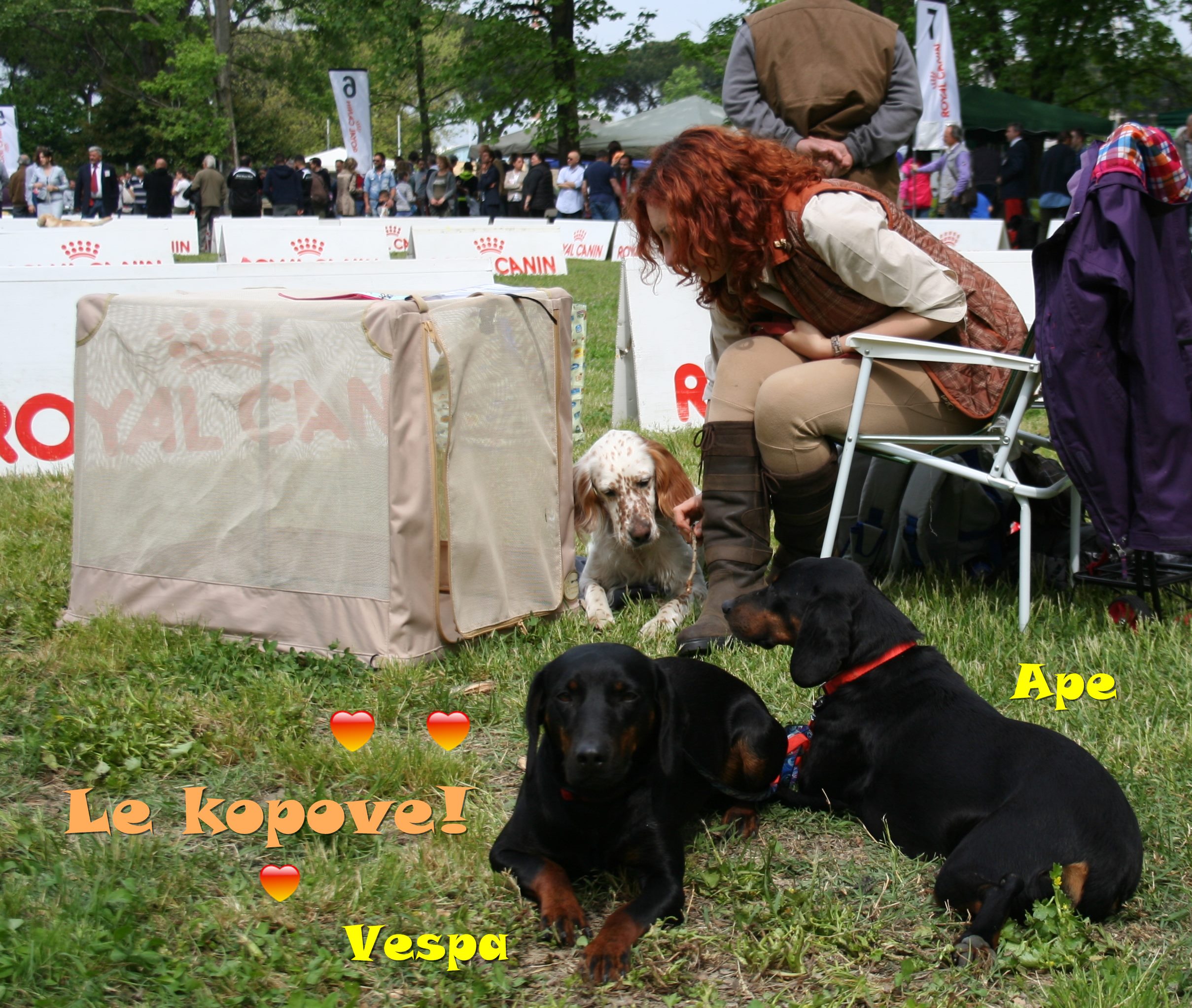 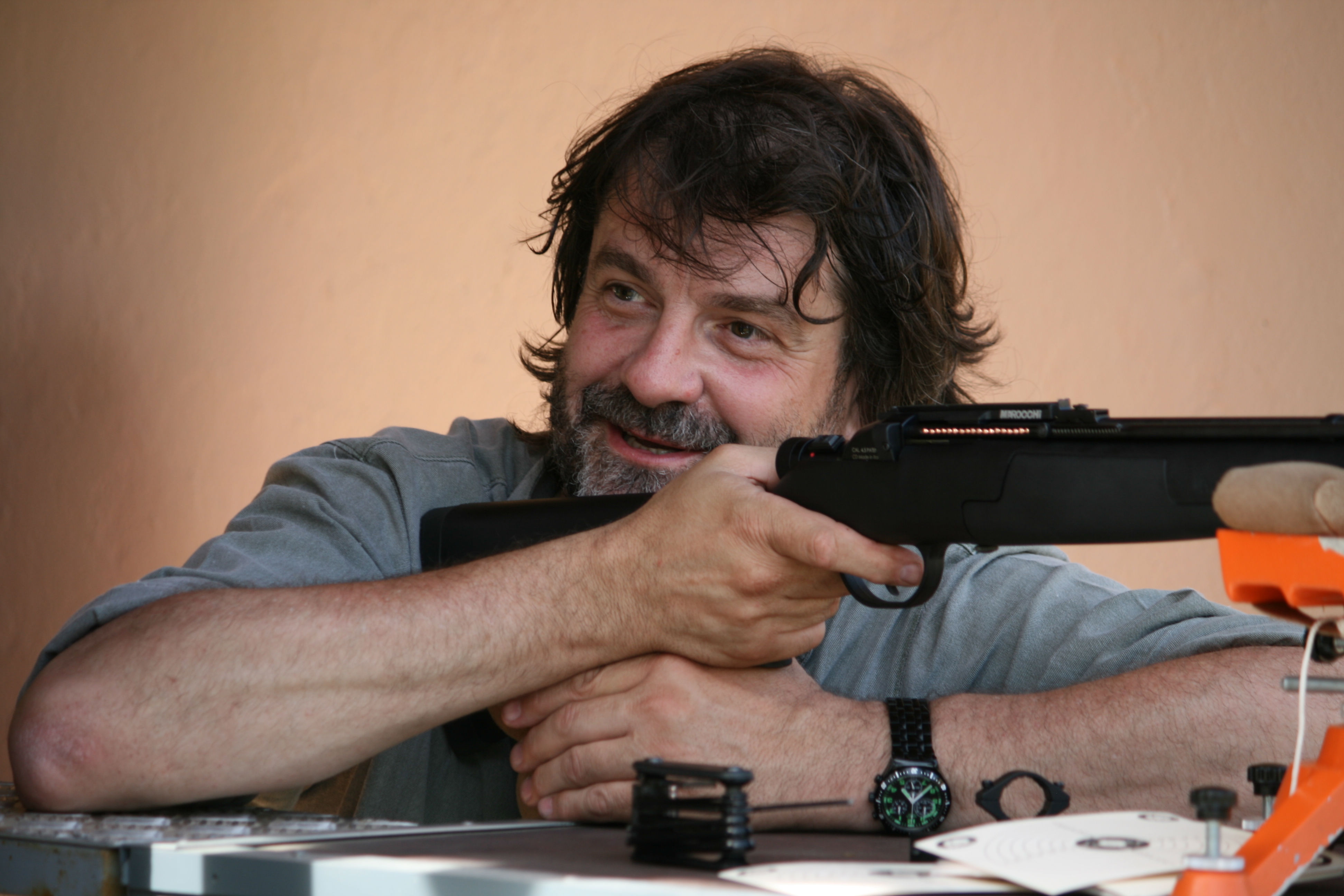